Cabo San Lucas: Baja California’s Party Paradise Located on the southernmost tip of the Baja California peninsula, Cabo San Lucas is a popular tourist destination for numerous reasons. Its beautiful desert landscape and beaches, combined with its exciting and vibrant […] 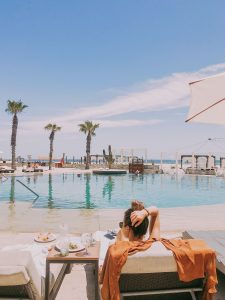 Located on the southernmost tip of the Baja California peninsula, Cabo San Lucas is a popular tourist destination for numerous reasons. Its beautiful desert landscape and beaches, combined with its exciting and vibrant nightlife make it one of the more exciting places to visit or spend your retirement.

Located where the Sea of Cortez and the Pacific Ocean meet, this Mexican destination boasts pristine ocean views, luxurious resorts and world-class dining. If you’re into sport fishing, Cabo is considered the Marlin capital of the world. From snorkeling to boat excursions, you can find your oceanside bliss in Cabo San Lucas.

If you are considering retiring in Cabo San Lucas or even just visiting, here is what you need to know about this exciting Mexican city.

For nearly 10,000 years the Pericu people inhabited the Cabo San Lucas. When the first Europeans arrived in the 1700s, they claimed the area and founded the original town. By the 1900s, this sleepy little Mexican village began to grow as a popular fishing destination.  In the 1970s, tourism ramped up with the development of the Transpeninsular Highway. Today, Cabo San Lucas is one of the most visited locations in Mexico and one of the top travel destinations in all of Latin America.

Getting to Cabo San Lucas

The best way to get to Cabo San Lucas is to fly into the Cabo San Lucas International Airport (CSL). Once you arrive at the airport, you can take a SuperShuttle, Transcabo, an Uber, or a taxi from the airport. You can also choose to rent a car. Many hotels in the area also offer shuttles, so be sure to check with your hotel before you grab a cab.

Once you are in town, you can get around by walking or using small buses that are used by locals. They only cost a few pesos to ride and are much less expensive than the taxis. Uber is also a great option for anyone looking to spend a night out on the town.

Taxis are widely available throughout Cabo San Lucas, but the rates are on the high side. A one way fare between Cabo San Lucas and San Jose del Cabo can be as high as $60 USD.

Water taxis are also available and can take you to some of Cabo’s most popular beaches, such as Playa del Amor and Playa Medano. These water taxes are affordable and will run you roughly $10 USD each way. All rates are negotiated ahead of time. 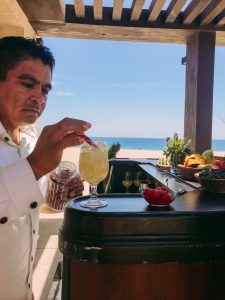 Cabo San Lucas is known for its beautiful pristine beaches and ocean views. One of the most famous is Playa del Amor or Lover’s Beach. It is located just south of Cabo’s downtown and easily accessible by water. It is located near the infamous Land’s End rock formations. You can choose any of the many accessible beaches in the area to partake of a variety of outdoor activities, such as snorkeling, dolphin and whale watching and sportfishing. In fact, if you visit Cabo San Lucas in October, you can see the highest paying marlin tournament in the world, the Bisbee’s Los Cabos Offshore.

When you are not at the beach soaking in the sun, you can head downtown to visit a wide variety of art galleries, museums and parks. Browse the incredible selection of art at the Golden Cactus Gallery before taking in a performance at the Pabellón Cultural de la República. Soak in some history at Parroquia San Lucas Catholic church in downtown Cabo San Lucas or drench yourself with the family at Splash Water World.

After a day out in the sun, you can choose to dine at any one of the many incredible restaurants, cantinas and bistros in the town. From sipping Margaritas in the moonlight to grabbing local tacos from street vendors, Cabo San Lucas has a little something for everyone. One of their most traditional foods is the Chocolate Clam. This clam comes roasted on the stone bed and is covered in rosemary. Do not leave Cabo without trying it!

Cabo San Lucas is a night owl’s paradise. It is known for its fun and festive nightlife with a host of great bars, clubs, lounges and live music venues. The two best nightspots, El Squid Roe and Cabo Wabo, have been around for over two decades. You can grab a pint at Baja Brewing Company and watch the sunset on the outdoor rooftop terrace. If beer isn’t what you’re craving, head over to the Rooftop at the Cape Hotel to sip some craft Mezcal cocktails.

Cabo San Lucas is located on the Pacific Coast of Baja California Sur. Here, the summers are long and hot, although it rarely gets above 96° F. Average summer temperatures range in the 90s. This makes it the perfect place to enjoy a wide range of outdoor water activities.

The winters in Cabo San Lucas are also comfortable and dry. It rarely gets below 56° F and the average temperatures usually stay in the 60s. Because of this, many expats move here to escape harsher winters up north. Some stay forever, while others are simply snowbirds, leaving Cabo after the winter.

Owning and Renting a Home in Cabo San Lucas

Many visitors to Cabo San Lucas love it so much that they decide to stay. Some wish to simply get away from the harsh winters and rent a place by the water. Others want to retire in paradise and live in Cabo year round. No matter what you are looking for, you can find it in Cabo. Like any beach resort, the closer you are to the water, the more you can expect to pay. Move inland, and you can expect to save. If you wish to purchase a home, you can check out a variety of realtors and pricing including  Remax, Recabo and Cabo Real Estate Services.

There are plenty of long-term leases and rentals available for anyone wishing to rent in Cabo San Lucas. Browse the local rentals at Sun Cabo, Vacasa, Diamond Los Cabos and Luna CaboRicardo. 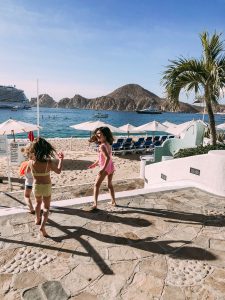 People in Cabo are welcoming and warm and make anyone feel right at home. The economy is mainly driven by tourism, so many expats get to mingle with Americans, Europeans and Canadians virtually year round.

Cabo San Lucas is a favorite spot for many expats because it has all the traditional comforts of home, including a Costco, Walmart and Home Depot. You can easily grab a beer for less than three dollars or take that special someone to the movies for less than six. A romantic dinner for two only costs about $25 and groceries in Cabo are cheaper than most places in the United States and Canada. Most expats even have a housekeeper and a gardener for about $20 per week. With all the comforts and luxuries of home, but at a quarter of the price, it’s no wonder so many people choose to live and retire in Cabo.

To connect with other expats in Cabo San Lucas, you can join their Facebook group. You can also find many of the expats at any number of the incredible cantinas and bars mentioned above.

Medical care in Cabo San Lucas is better than many Americans realize. Mexico is known for low cost healthcare options and has become a main destination for Americans seeking treatment without exorbitant bills.

If you need medical attention while in Cabo San Lucas, you can visit Cabo Medical Care or AMC American Medical Center. This center offers emergency care, surgical procedures and ambulance services. You can also visit St. Luke’s Hospital, which is a private hospital located in the city. It is the leading hospital group for health care and medical tourism in Los Cabos, Mexico.

If you are looking for some advanced education, Cabo San Lucas has numerous colleges and universities to choose from, including Universidad de Tijuana Campus Los Cabos.

You can also choose to learn spanish at Spanish In Cabo. And there are numerous English bookstores in the area, including Bookworm Los Cabos .

According to the United States Department of State’s Bureau of Diplomatic Security, Cabo San Lucas, like much of the Baja Peninsula has seen an increase in crime in recent years. However, compared to much of Mexico, residents and tourists here are relatively safe and insulated. In fact, more drive-by shootings occur in an average week in Los Angeles than have taken place in Cabo San Lucas in three decades.

As of 2013 Cabo San Lucas, along with its northern neighbor La Paz, are among the safest places in Mexico. The Numbeo Crime Index gives Cabo San Lucas  a score of 44. Crime levels of between 40 and 60 are considered moderate on this scale. This index is based on personal reports and surveys. Residents reported feeling high levels of safety walking around during the day and night.

It is worth noting that many parts of Mexico are substantially safer than the United States. When it comes to homicides, the US ranks 7th in the world, while Mexico ranks 17th. And the United States has 92% more homicides with guns than Mexico.

Living in Cabo San Lucas may resemble a picture perfect postcard. Long walks on the beach, ocean fishing, kayaking tours, and whale watching are just some of the daily activities you can enjoy. Cabo is also a very modern city in terms of building and infrastructure. Though not the cheapest place in Mexico to live, most Americans and Canadians find that their dollars stretch much further in Cabo than back home. This makes it a great place to retire for those who love the nightlife and seafaring adventures. With cheap medical care and plenty of housing, Cabo San Lucas is a retirement paradise most people can only dream about. But it can be yours if you’re up for a move to the fun side of the wall.

The Fun Side of the Wall: Baby Boomer Retirement in Mexico

Travis Scott Luther is the best selling Author of The Fun Side of the Wall: Baby Boomer Retirement in Mexico. Luther is also a former Adjunct Professor of Entrepreneurship at MSU Denver. He received his Masters Degree in Sociology from the University of Colorado Denver where he later served as Entrepreneur in Residence.

Purchase Options: Buy from Amazon.com, buy from Barnes&Noble.com, or buy from Our Website.

Photo by Claire Ward on Unsplash

Photo by Victoria Bragg on Unsplash